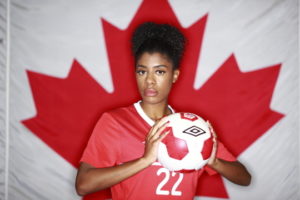 “Pain is temporary but eventually it will subside and something else will take it’s place. If I quit however, it will last forever.

My story is regarding the London 2012 Olympics and the impact watching the Women’s National Team win the Bronze had on me. I always aspired to represent Canada but that tournament was the turning point for me and the vision I had for myself. Right after the London Olympics, I had my first call up to the full national team. Unfortunately, in my last Collegiate game at WVU, I injured my knee and was out for 6+ months. It was hard and long recovery but I never lost sight of my goal.

Once I was back and healthy, I was able to train with some of my idols like Christine Sinclair. It all seemed to be one big blur but little did I know the challenges just begun. Playing with WVU, and Canada’s youth teams, I was always a starter and even captained the U17 team. Once I moved up to the Women’s National team I didn’t start, or play at all for a while. It was a hard adjustment and I got to a point where I was unhappy. The game that brought joy and happiness to me for many years, was causing me pain. I realized that the first thing I needed to do was change my mindset and stop pointing the finger at other people and factors, for my circumstance. Gratitude played a vital role in many areas of my life. Every day got easier, because I looked at the things I did have as opposed to the things I did not have. I was happier and grateful for seeing another day and having another opportunity to play the game that I love. Nothing was going to beat hard work and that is what was needed for me to reach my aspirations. At the same time, self believe was the motivating factor behind me.  I will never forget the day in the Cyprus Cup in Greece. One of our players was issued a red card giving me my moment. The coach called me over to get ready and I played 45 minutes, 45 minutes that was the beginning of the next stage of my soccer life. From that point I have been playing with the Women’s National Team as a regular starter.

Until now, I NEVER take anything for granted because I remember  all the hard work it took to get here.

Never lose sight of your target and please understand that there is no way around hard work, if you are in the progress of achieving your dreams.”